OPERA DEI PUPI, SICILIAN PUPPET THEATRE. Inscribed in 2008 on the Representative List of the Intangible Cultural Heritage of Humanity (originally proclaimed in 2001)

The puppet theatre known as the Opera dei Pupi emerged in Sicily at the beginning of the nineteenth century and enjoyed great success among the island’s working classes. The puppeteers told stories based on medieval chivalric literature and other sources, such as Italian poems of the Renaissance, the lives of saints and tales of notorious bandits. The dialogues in these performances were largely improvised by the puppeteers. The two main Sicilian puppet schools in Palermo and Catania were distinguished principally by the size and shape of the puppets, the operating techniques and the variety of colourful stage backdrops. These theatres were often family-run businesses; the carving, painting and construction of the puppets, renowned for their intense expressions, were carried out by craftspeople employing traditional methods.

Gaetano Napoli founded the company in 1921 which he then entrusted to his three sons Pippo, Rosario and Natale. The Natale’s four children, together with their untiring mother Italia Chiesa, have continued this antique family tradition. Then, today, the children of Fiorenzo take an active part in putting on these shows and to complete the company there is also Alessandro Napoli, an anthropologist, who sees to the needs of the shows, and Agnese Torrisi, Fiorenzo’s wife, as director. By continuing to hand down from father to son this splendid tradition, the Napolis present shows based on old plots as well as the texts of Napoli family, who has created modern plays for these marionette operas, continuing to conserve this antique occupation of Catania intact and complete. The collection comprises marionettes from the end of the 1800s and the early 1900s, together with scenery; posters and theatrical furnishing. In fact, the Napolis also set up many exhibits on opera of Catania, organising meetings and seminaries to talk about this ancient art that is still living thanks to this passion handed down from father to son. 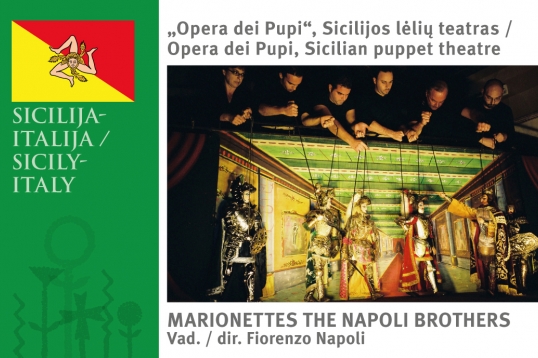