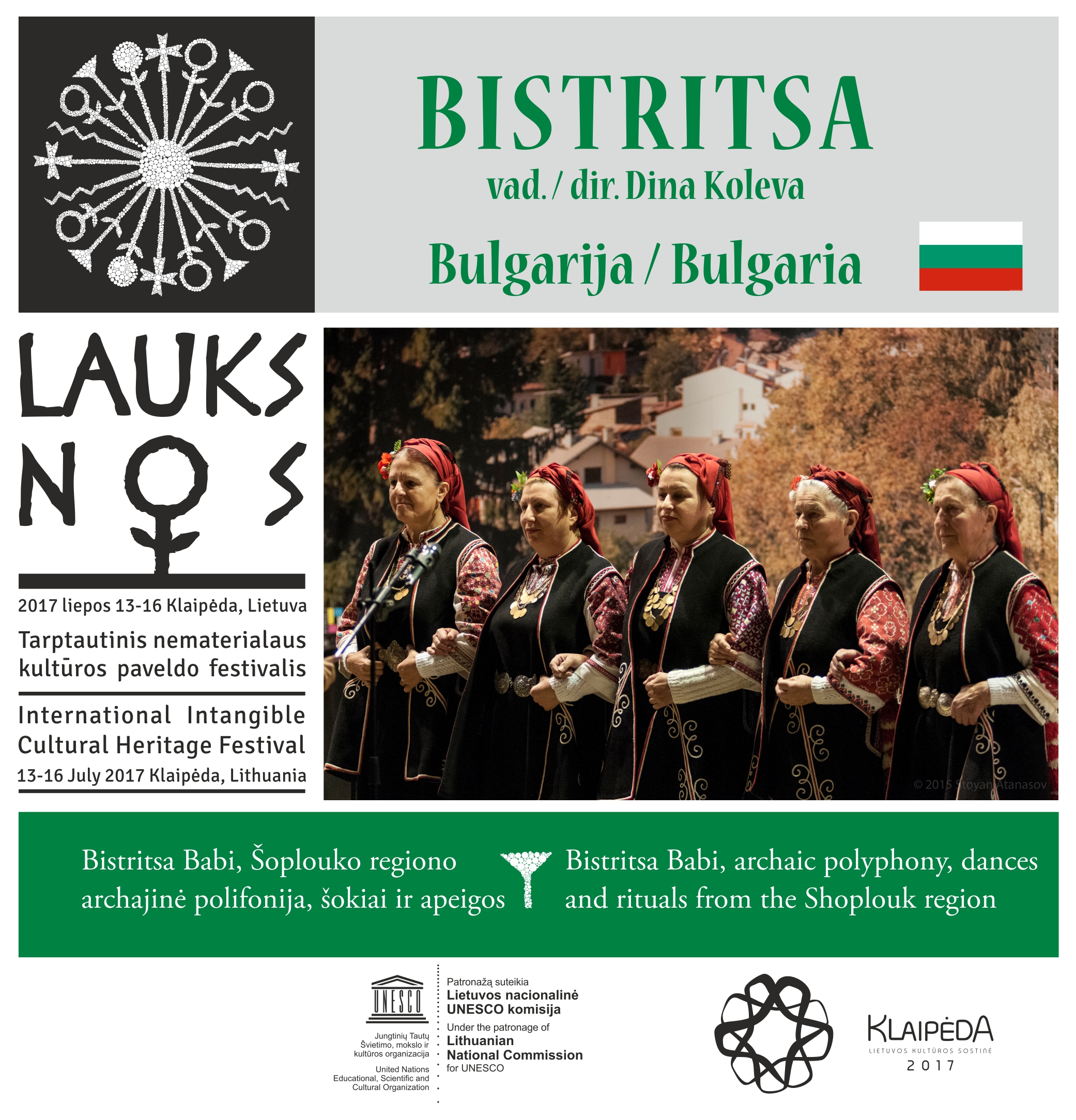 Folk Ensemble „BISTRITSA“, dir. Dina Koleva (Bistritsa). Founded in 1949 in the village of Bistritsa, near Sofia, ensemble BISTRITSA comprises singers, dancers and musicians. The ensemble is unique with performing of ancient singing tradition through which, the core group form the legendary Bistritsa Grannies. The inheritors of the Grannies, their Granddaughters, master the difficult vocal technique of close- harmonized antiphonal singing in a natural manner by listening and performing together with the elderly ladies. The orchestra consist of traditional instruments: bagpipe, rebeck, six string pandora, wooden flute and accordion. An interesting fact discovered by musicologists studying the Bistritsa dances is that the steps do not mirror the music: they are independent and are in harmony with the music at a deeper level – as a pulse rather than as a fixed rhythm.

Bistritsa Babi, archaic polyphony, dances and rituals from the Shoplouk region (Bulgaria). Inscribed in 2008 on the Representative List of the Intangible Cultural Heritage of Humanity (originally proclaimed in 2005).
The traditional dances and polyphonic singing found in the Shoplouk region of Bulgaria are still performed by a group of elderly women, the Bistritsa Babi. This tradition includes diaphony, or what is known as shoppe polyphony, ancient forms of the horo chain dance and the ritual practice of lazarouvane, an initiation ceremony for young women. The dancers, dressed in traditional costumes, hold each other by the waist or belt and dance in a circle, stepping lightly and moving counter-clockwise. Although the social function of the polyphonic singing has changed over the twentieth century, as it is now primarily performed on stage, the Bistritsa Babi are regarded as an important component of the region’s cultural life, promoting traditional expressions among the younger generations. The women are among the few remaining representatives of traditional polyphony and the village of Bistritsa is one of the last areas in Bulgaria in which this cultural expression has been maintained over the centuries.