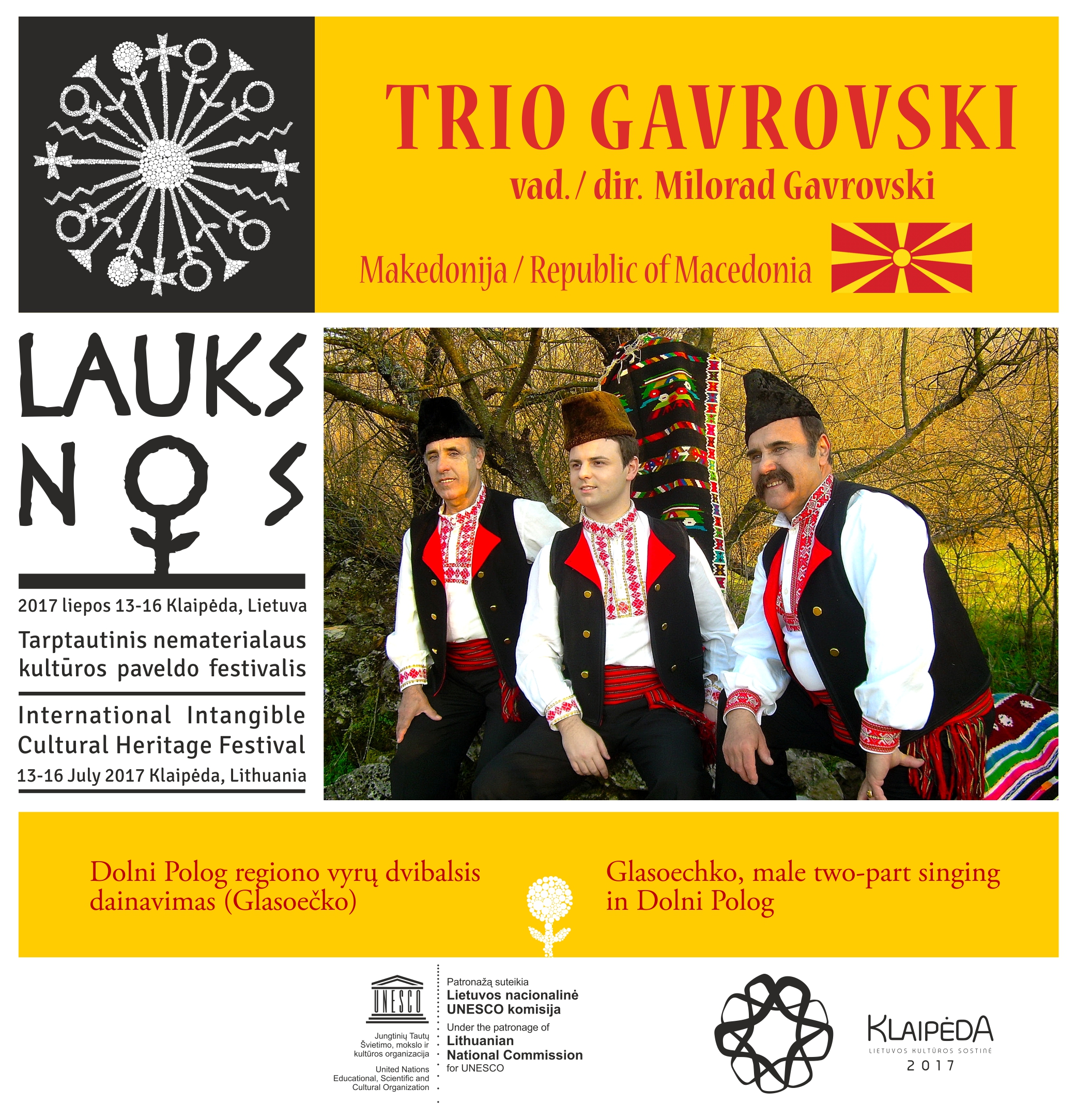 „TRIO GAVROVSKI“, vad. Milorad Gavrovski (Tetovo). As one of the most known representatives of the Glasocehko singing, more than four decades the group Trio Gavrovski preserves, nurtures and transmit this specific Macedonian cultural heritage. More than 40 years ago the group existed as a amateur group named “Brother Gavrovski” with its members being the three brothers Milorad, Vaso and Slavko Gavrovski. In 1999 Slavko was replaced with Miroslav, the son of Milorad, who soon after take the role of leading voice. The name of the group was changed from “Brother Gavrovski” to “Trio Gavrovski”. For many years since they are performing on many prestigious festivals, etno-festivals, seminars and other events in Republic of Macedonia, but also in other countries. They have recorded several individual CDs as well as CDs with renowned Macedonian folk singers and players. In 2003 they have established Association for safeguarding of the Macedonian folk singing tradition named “Trio Gavrovski” from Tetovo. The main goal of this association is to constantly safeguard and preserve the specifics of the Macedonian pure traditional singing and initiate its transmission to the younger generation.

Glasoechko, male two-part singing in Dolni Polog (The former Yugoslav Republic of Macedonia).
Inscribed in 2015 on the List of Intangible Cultural Heritage in Need of Urgent Safeguarding.
Male two-part singing in Dolni Polog is a traditional form of vocal music, known locally as Glasoechko, which is characteristic to the region. Songs are sung in a polyphonic manner with the drone voice moving contrapuntally in relation to the melodic leading voice, often accompanied by a shepherd’s flute and a bagpipe. Glasoechko is performed spontaneously in groups of two or three, at celebrations, assemblies, weddings, dinner parties and other social gatherings. Performance of this musical heritage constitutes a symbol of cultural identity for the bearers, integrated within a multi-ethnic society. Practitioners of this tradition are prominent and talented individual singers who have acquired their knowledge by imitating the techniques and skills of their predecessors. Male two-part singing in Dolni Polog faces a number of very serious threats to its viability, however.