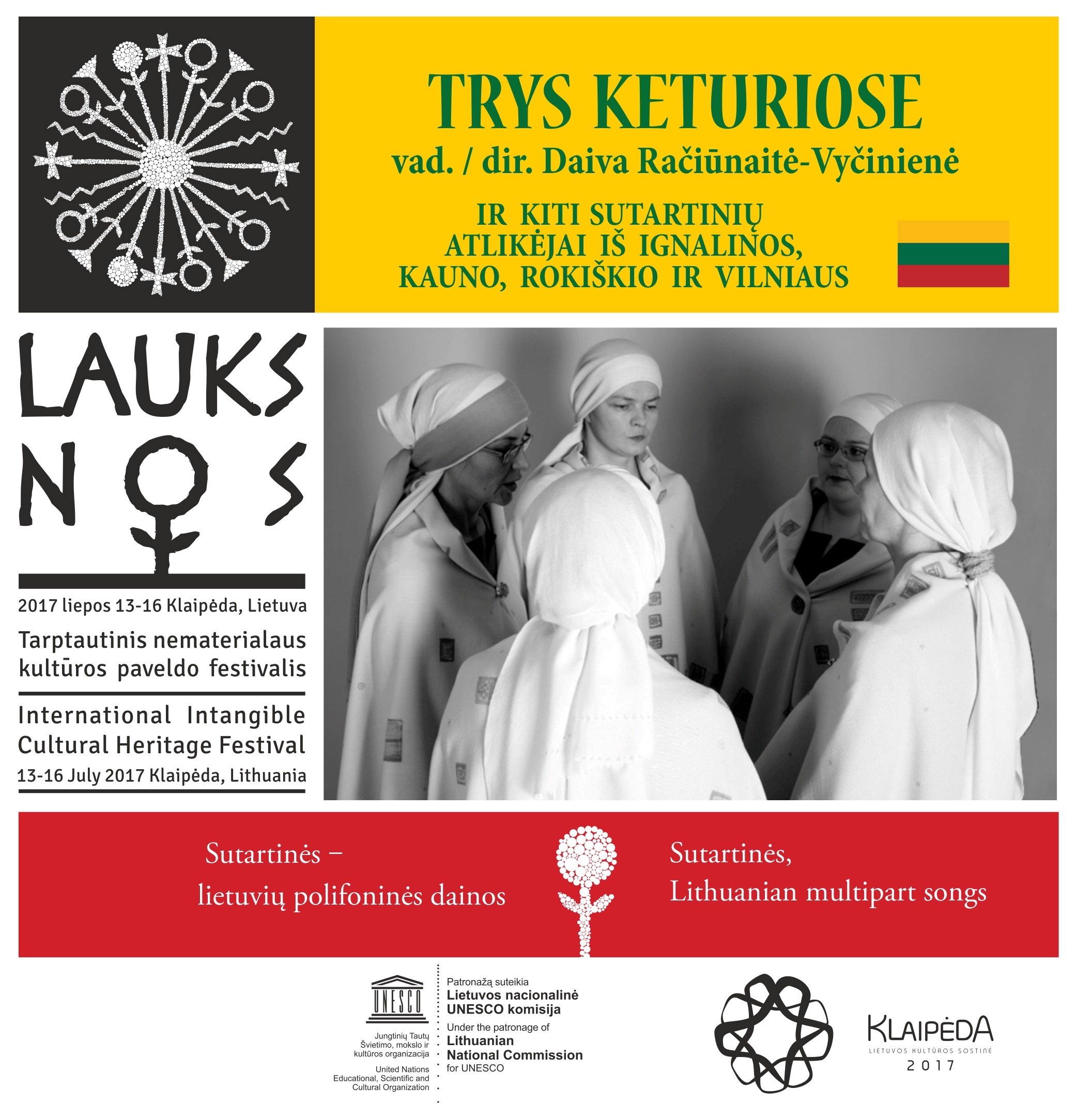 TRYS KETURIOSE, leader Daiva Račiūnaitė-Vyčinienė (Vilnius) and other groups of sutartinės performers from Ignalina, Kaunas, Rokiškis and Vilnius. Singers of Trys Keturiose became interested in sutartinės (Lithuanian multipart songs) more than 20 years ago. The composition of the group slightly changed over time, until the current one set it: Daina Norvaišytė, Eglė Sereičikienė, Rima Visackienė, Audronė Žilinskienė and Daiva Vyčinienė, the initiator and leader of the group. When singing sutartinės, they do not try to copy the voices in archive recordings. The performers try to understand the secrets of the old intonation and articulation, at the same time revealing peculiarities of their own specific timbres. During the Sutartinės Time event, which will take place at 20:00 on 13 July in the yard of the Clock Museum, the beauty of diversity of sutartinės will be revealed by sutartinės performers of folklore ensembles Čiulbutė (Ignalina), Gastauta (Rokiškis), Kadujo (Kaunas), Laukis (Vilnius), Linago (Kaunas), Poringė (Vilnius), Ratilio (Vilnius), Sasutalas (Kaunas) and Tatato (Vilnius).

Sutartinės, Lithuanian multipart songs. Inscribed in 2010 on the Representative List of the Intangible Cultural Heritage of Humanity.

Sutartinės (from the word ''sutarti'' – to be in concordance) is a form of polyphonic music performed by female singers in north-east Lithuania. The songs have simple melodies, with two to five pitches, and comprise two distinct parts: a meaningful main text and a refrain that may include nonce words. There are almost forty different styles and ways of performing Sutartinės. Mainly, they can be performed by two singers in parallel seconds; by three singers in strict canon, all performing both phrases of the melody at staggered intervals; or by two groups of singers, the lead singer of each pair singing the main text, while the partner sings the refrain, before the second pair repeats. Choreography is uncomplicated and movements are moderate, often austere, such as walking in the form of a circle or star while linking arms and stamping feet. Sutartinės are usually sung by women, but men perform instrumental versions on pan-pipes, horns, long wood trumpets, fipple flutes and plucked zithers.